The Boston Globe Finds Four of My Peaceful Places! 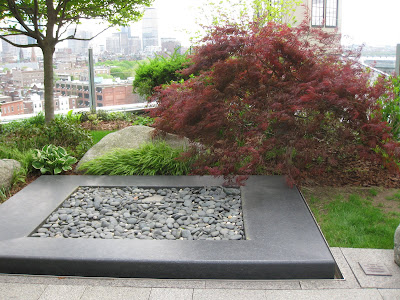 Boston Globe columnist Yvonne Abraham wrote an article in Sunday's paper profiling some of her favorite secret garden spots in the city.
I was interested to see that four of her five places are among the 121 that will be featured in Peaceful Places Boston: the Howard Ulfelder Healing Garden at Massachusetts General Hospital, pictured above; the atrium at 101 Merrimac Street, near North Station; the observation deck at Independence Wharf just off the Rose Kennedy Greenway; and the Cambridge Center Roof Garden, shown here. 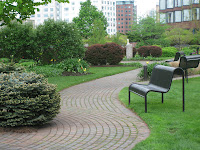 The fifth place, the Custom House observation deck, was one I'd considered but eliminated because there's too narrow a window of time to visit. Too bad, because it's a lovely, historic spot that should belong to us all. Here's a link to the article, Secret Garden Spots.
Posted by Lynn Schweikart at 9:03 AM No comments:

This blog celebrates peaceful places, people, events, activities, and musings. It's a companion to my book Peaceful Places Boston: 121 Tranquil Sites in the City and Beyond, published by Menasha Ridge Press. Other cities in the Peaceful Places series include New York, Los Angeles, San Francisco, and Chicago.

Interested in seasonal cooking and ingredients from local Farmers' Markets in Boston and Seacoast NH? See my other blog savoringtheseasons.blogspot.com 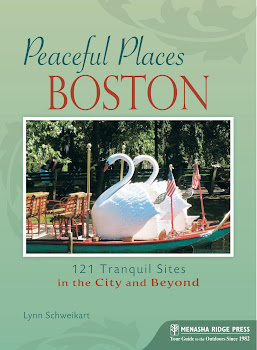 Lynn Schweikart
For nearly 40 years, Pennsylvania native Lynn Schweikart has nurtured an unabashed love affair with her adopted city of Boston. She enjoys wandering around its varied neighborhoods, returning to favorite haunts, and discovering new places. She also loves cooking, going to farmers' markets, searching out local ingredients, and collecting interesting recipes. A marketing communications specialist, writer, and brand storyteller at her company LKS Creative Counsel, Lynn is also co-creative director/chief storyteller at Gen-Sights. Lynn has worked on high-profile accounts across a range of industries. She has been the recipient of numerous national and regional advertising creative awards. Her book, Peaceful Places Boston: 121 Tranquil Sites in the City and Beyond was published in 2011. Lynn holds a B. A. in sociology from Northwestern University. She divides her time between Boston and on the New Hampshire seacoast.